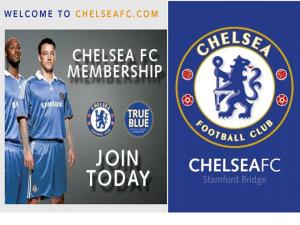 [What an ironic but futuristic front page that Chelsea has in their official web where these two players last night  made a real headline to help them becoming a ‘Supreme Looser’]..

It seems that ‘champion attitude’ is fading away from Chelsea since Avram Grant took the lead. Last night, the misery was completed by a defeat in UEFA Champions League from the same team who has beaten them in the race for English Premier League Championship. For me, being a runner up behind the same opponent in two subsequent championships is not acceptable. Who is the greatest looser than the runner up ? Hence, by becoming runner up twice in a row, I sadly say that they are ‘the Supreme Looser’.

Last night, I watched the game with optimism to see Chelsea beat MU and grab the UEFA Champions League Title. After a sloppy start until around 35 minutes in the first half, Chelsea had started to dominate MU almost through out the game. A goal from Ronaldo in 28th minute was equalized by a goal from Lampard in 45th minute. Then a continual domination in second half and additional periods was shown. They had several chances to win it without went through the two x 15 minutes additional periods. However, they failed to take these chances and let the game to go through penalty shoot outs.

Then, God gave them another chance to win it after a poor penalty from Ronaldo was blocked by Czeh. Then it came to John Terry as the last penalty taker. If he made it, Chelsea will win as other Chelsea’s penalty takers successfully beat Van Der Sar.

And again, it’s became a total failure when John Terry was slip when he took the penalty and the ball went out to the left side of Van der Sar’s goal. He failed and MU got the second wind. The next MU’s penalty takers made it 100% but Anelka from Chelsea failed. MU won and I was starring in front of the TV with a broken heart. Final Score : 7-6 for MU…

What a perfect combination would it be to see Ronaldo failed in penalty and Chelsea won… but Terry (in penalty shoot out) as well as other players (in game play) had ruin it for me as ‘everything but MU member’ and for million of their fans out there. At the end, MU won the title.

I wish Mourinho is the one who accompanies them into the Champion League final…. I wish Mourinho is the one who accompanies them until the end of Premier League. With the Mourinho effect and charisma, I have my own confident that they will win both this year. I don’t have such confident for Avram Grant since he did not have much of history as ‘champion’. Chelsea players need the champion charisma especially since this is their fist Championship final. I hope Roman will realize his mistake and in the next season will look for more charismatic Manager with the champion attitude that can influence all team.

Updated on 25 May 2008 : Avram Grant has finally gone, check out this article.

Chelsea FC has all things to become great winner, but at the end of last night, they are nothing than Supreme Looser…

There is nothing I can do than get back to sleep and dream about my favorite team Newcastle wins the Premier League and European Champions League..